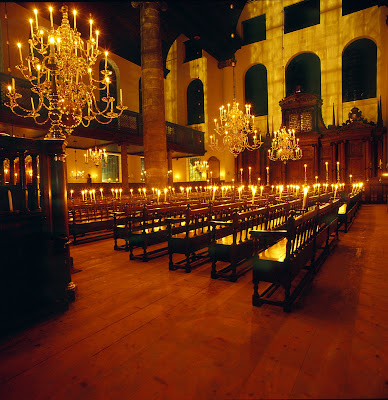 My new blog about Dutch political culture, which I began only today.
http://mokumalef.web-log.nl/blog/
The first posting:
This is Mokum Alef.

I want to use this blogging space to speak my mind about the currents of Dutch political culture, and that's why I decided to call this space "Mokum Alef". Mokum is the Yiddish word for place or safe haven, which stands for what Amsterdam represented to the Spanish-Portuguese Jewish diaspora that settled in the city after they were expelled from the Iberian peninsula. In Jewish popular culture, "Mokum" was the term used to denote some cities in the Netherlands and Germany in early modern times. Using letters of the Hebrew alphabet to refer to specific cities, Amsterdam had been "Mokum Alef", Berlin had been "Mokum Beis", Delft had been "Mokum Dallet" and Rotterdam had been "Mokum Reish". There were other smaller places, particularly in the Netherlands, that were also called Mokum, such as Alkmaar and Winschoten, where there had been sizeable Jewish communities before the Nazi occupation.

Roughly 90% of the Dutch Jews were round up and sent to their deaths in the camps, so that there could be no longer a "Mokum"; but it is still used as a nickname for Amsterdam (without the aleph), for which it is used sometimes in a sentimental context, like that of the German "Heimat". 60 years after the Holocaust and in the middle of a bitter and rather disappointing cultural war, Amsterdam becomes for me a Mokum again, and that's why I called this blog Mokum, to discuss our political culture and to see whether this can still be a Mokum, for many years to come.
Posted by Ari Amaya-Akermann at Tuesday, July 20, 2010

Email ThisBlogThis!Share to TwitterShare to FacebookShare to Pinterest
Labels: Writing is Prayer